That book I was talking about... 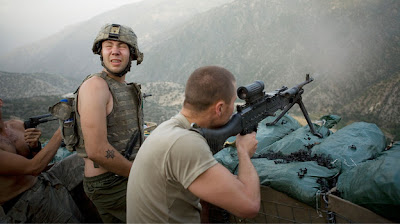 WAR by Sebastian Junger
Excerpt:
They wore their trousers unbloused from their boots and tied amulets around their necks and shuffled around the outpost in flip-flops jury-rigged from the packing foam used in missile crates. Toward the end of their tour they'd go through entire firefights in nothing but gym shorts and unlaced boots, cigarettes hanging out of their lips. When the weather got too hot they chopped their shirts off below the armpit and then put on body armor so they'd sweat less but still look like they were in uniform. They carried long knives and for a while one guy went on operations with a small samurai sword in his belt. The rocks ripped their pants to shreds and they occasionally found themselves more or less exposed on patrol. A few had "INFIDEL" tattooed in huge letters across their chests. ("That's what the enemy calls us on their radios," one man explained, "so why not?") Others had tattoos of angel wings sprouting from bullets or bombs. The men were mostly in their early twenties, and many of them have known nothing but life at home with their parents and war.
Posted by The Stevens' at 9:27 PM